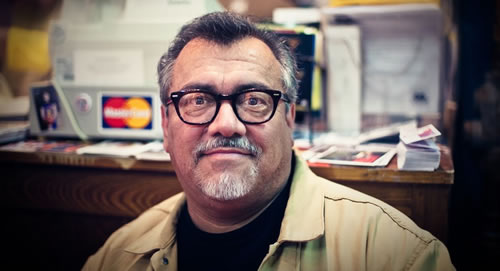 “The troublemakers” is a sort of spin-off of your graphic novels of Luba which shows us a “movie” played by one of its characters. How did come to your mind the idea of creating fake comic adaptations of B movies?

Love and Rockets was a 28 page comic book then and I only had 18 pages an issue to work with. I had to pick the most important stories to put into the book, which didn’t give my any room to do too many different types of stories. I have always enjoyed crime fiction and explicit horror stories but I couldn’t fit that into my work. The only character I was able to do anything I wanted to with was Luba’s sister Fritz. The other characters were stuck in the Palomar continuity and Fritz was an independently wealthy playgirl that I could send anywhere I wanted to take her. At this same time I wanted to get into graphic novels so I made Fritz an actress and put her in movies/stories that could be about anything I wanted them to be about. The trouble I’m finding, though, is that few of my readers want me to go that way.

The Scope format of the frame, the selection of the “shots” seems to recall a movie. Has you ever thought about to direct any movie with your own characters?

I tried years ago to direct a Palomar film, but too many people had their own ideas of what it should be.

If “The Troublemakers” were a movie, it could be a good movie for a grindhouse or crooked-story season. Which kind of movies do you like? Did you think about any particular movie or movies while you were writing?

I didn’t have any movie in mind with The Troublemakers but a sexy crime melodrama that we rarely see much any more.

Are you going to continue along de lines of the fiction inside the fiction in the future or perhaps you are thinking about returning to your particular world: Palomar?

I will return to Palomar with Love and Rockets vol 3 book 5, and the Fritz movie influence will be there dominating the proceedings.

Women are really important in this graphic novel, also they were it at “Luba” and “Girl Crazy”. It could be possible to say that everything revolve around them.  What is it the point that make so unique every single woman of your graphic novels?

I simply love drawing sexy women. It’s a natural thing for me to give them character after I’ve designed their look.

Men and women seem to be always confused, lost in the landscape. Are your characters pessimitics or just clear-thinking?

The characters are always lost, as you noted. In the Fritz stories there are 2 angles: the story is about people drawn to Fritz’s sexuality or uninterested it it.

You have many influences: the superhero comic-books, Mad, Archie, the underground comix… Do you read contemporary comics? Are there any author you are interested in?

I really enjoyed Chester Brown’s Paying for it and Derf Backderf’s My Friend Dahmer. I rarely read new comics and I never read prose. I hate writers of all kinds.

Somehow, your stories remind me the best quirky narrative. It comes to my mind two authors inevitably: the novelist Jim Thomson and the director David Lynch. Would you admit both of them as influences of yours?

As I said, I hate authors but I do like filmmakers; David Lynch is an influence for my Fritz books. I am not influenced by any authors at any time, except unconsciously.

I would like to ask you at last: How would you define Palomar? What is your opinion about the usual mentions of “magic realism”?

I didn’t know what magic realism was until somebody told me. I grew up with reality and unexplained mysteries side by side so I thought that would be interesting to use in stories. I did so because I had no idea how to stand apart from other writers and artists and I knew if I didn’t stand apart I wouldn’t be noticed. I wanted to make a living at cartooning and being myself was the only way I knew how to be my best.