Jaime Hernandez is one of the greatest authors that we can find in the American independent comic-book scene. In his 30-year career, he has been a reference for other artists and for a mass of enthusiastic supporters looking forward to his works. The main peculiarity of Jaime is that he has set the majority of his work in the same world, tracing the lives of a set of characters, especially Maggie and Hopey. Thanks to La Cúpula, Jaime’s publisher in Spain, we contacted him to about his work.

What led you to start a career as a comic-book author and work with your brothers?

My family and I grew up reading comics and very early on wanted to do them. When it was time to figure out what I wanted to do with my life I only wanted to do comics. It wasn’t until my brother Mario approached Gilbert and I to publish our own comic did I have a forum to tell the stories I was aching to do.

How would you explain the universe you’ve created in Love & Rockets to someone who has never read any of your comics? What will they find?

You had the freedom to go in any direction. Why have you been using the same core of characters for 30 years?

I like watching them age. It‘s exciting for me to see where they will go next. It works if you have full rounded characters to work with. 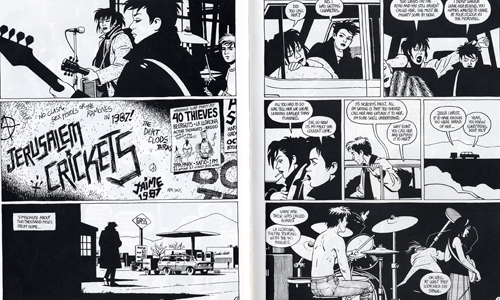 How much of yourself, your environment and your daily life can be found in the pages of your comic? And in particular, is Ray Dominguez your alter ego in the fictional world of Love & Rockets?

I used to believe Maggie and Ray were basically me in different bodies but as time passes I find these characters have become their own personas and are not me at all. I’m just putting down their stories and adding in my two cents where I think the situation needs it. I’m sort of their therapist.

The characters’ appearance has been changing over the years. But when they stop being punks, your designs don’t follow any current or specific fashion. What are the reasons for this timeless look that sometimes adds modern elements?

I only draw what I know and like. There is no plan behind it.

I do mostly slice of life because I’m mostly interested in character. How people live and react to and relate with one another. Once in awhile I will jump into another genre simply because it’s fun to draw. It’s not always fun to draw slice of life.

In 30 years your characters have evolved, physically aging but maybe not maturing at the same speed. What do you think of your characters’ growth and development? Do you have a big plan in mind for them?

Not really. I’m just following them to see what happens next. A lot of the characters are not mature for their age because I found that when I became as old as my parents, the only maturity we gain is that we know how to behave ourselves better in public. God’s cruelest joke on us is that we were given nineteen year old brains for the rest of our lives.

Why all your stories, even the more realistic, have surrealist elements? Is it a way to soften the harshness of the reality they are reflecting?

No, I just like to mess with my characters and readers now and then hopefully without alienating anybody. 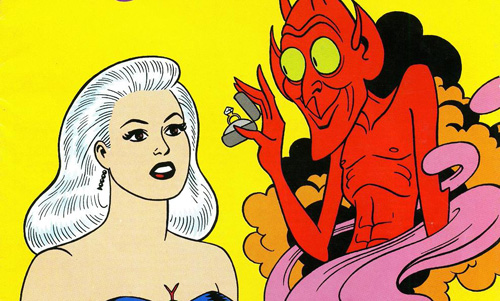 Your narrative makes extensive use of close-ups and medium shots, are they the resources you use to involve the reader in the story?

Sometimes yes. Many times the expressions on the character’s faces must be clear to the reader as sometimes that face is what is telling the story.

What are your main graphic influences? Which artists do you currently follow?

Nobody for graphic influence any more. These days I mostly get inspiration from the energy of artistic productivity by cartoonists doing personal work.

Why did you decide to develop a style that picks the best of mainstream and underground comic-book?

As a kid I wanted to be artists like Jack Kirby but by the time I was a teenager I could draw well enough that I could draw whatever I wanted. So my drawing style was more putting down lines the image needed instead of concentrating on style. Learning to ink as a teenager was more style conscious. I went through several styles (Barry Smith, Moebius) before I started to follow my drawing philosophy by putting the lines down where they were needed.

What do you think about the digital revolution that the comic-book industry is living? How does it affect your work? Do you use any digital tool?

No, I still do it with paper, pen and ink. It still does the job for me.

Lately the graphic novel has become a very popular format. Have you adapted the length and structure of your stories to this format?

Yes, and I have found that the longer format helps my stories sometimes. Let’s them breathe better. Then sometimes it’s not so necessary.

Many comic-books are being adapted for cinema and TV. Are you considering this for your creations and, in particular, for Maggie and Hopey?

Finally, what are your next projects? We assume (and hope) that you will continue working on your characters, but are you planning stories in a different setting?

I’m in the middle of a story for L&R with a lot of new characters that I am enjoying very much. 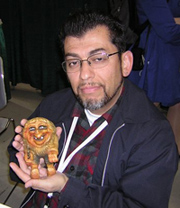